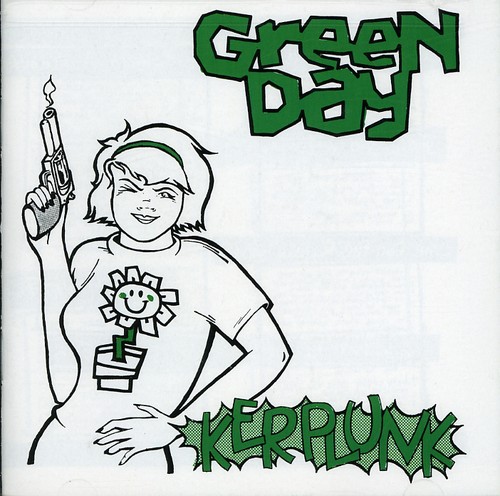 KERPLUNK is an early-1990s milestone. One listen to this album makes it clear why Green Day, rather than any of their Bay Area peers, were the band that won the major-label lotter

''Kerplunk'' is the second studio album by the American punk rock band Green Day. It was released on January 17, 1992 through Lookout! Records. ''Kerplunk'' was their last release on an independent label and was also the first album to feature their current band lineup, with Tré Cool on drums. The album has gone on to be among the best selling independently released albums of all time. Major labels took notice of ''Kerplunks phenomenal popularity and many approached the band. Green Day realized that they had outgrown their record distribution capacity with Lookout! and eventually signed with Reprise Records. With Reprise, Green Day would record and release their third album ''Dookie'' (1994).

The album officially includes only 12 tracks, but the versions released on CD and cassette also include the 4 tracks from the ''Sweet Children'' EP. One of those 4 tracks is a cover of The Who's "My Generation". Another notable track on the album is "Welcome to Paradise", which the band would re-record for their next album ''Dookie''.

In August 2005, Green Day pulled the album, as well as all of their other material released through the label, from Lookout! due to unpaid royalties. It was reissued on CD by Reprise Records, who Green Day has been with since leaving Lookout!, on January 9, 2007. Note that in Europe, the album was released by Epitaph Europe, and has remained in print. It was reissued on vinyl on March 24, 2009 by Reprise Records and includes a reissue of the ''Sweet Children'' EP.